"The rise of home working has led many families to now seriously consider moving further from town to gain the outdoors lifestyle and greater living space that previously seemed out of reach. With its hills and woodlands, and accessibility via road and rail, the lure of the Scottish Borders has never been stronger for many buyers.”

House prices within Berwick have remained relatively consistent over the past years despite the Covid-19 pandemic, rising 2% from August 2019 to August 2020. The robustness of values across the Berwick and Borders region has been testament to rising interest in living outwith the traditional core commuter zones around Edinburgh and Newcastle. The increase in interest in more rural lifestyle living has been reflected in an increase in enquiry levels for family homes across the region during the Summer and Autumn months.

This rise of interest has not been matched by supply of homes coming to the market., In the year to October, there has been -12% fewer homes coming to the market compared to the same period in 2019 due to the effective closure of the traditionally busy Spring market with Government restrictions both North and South of The Border. Registered sales in the first half of the year were c.25% down year-on-year. This said, there was a strong rebound in stock levels coming to the market over the Summer and Autumn months, which will likely translate into stronger sales figures in the second half of the year when the numbers are released. 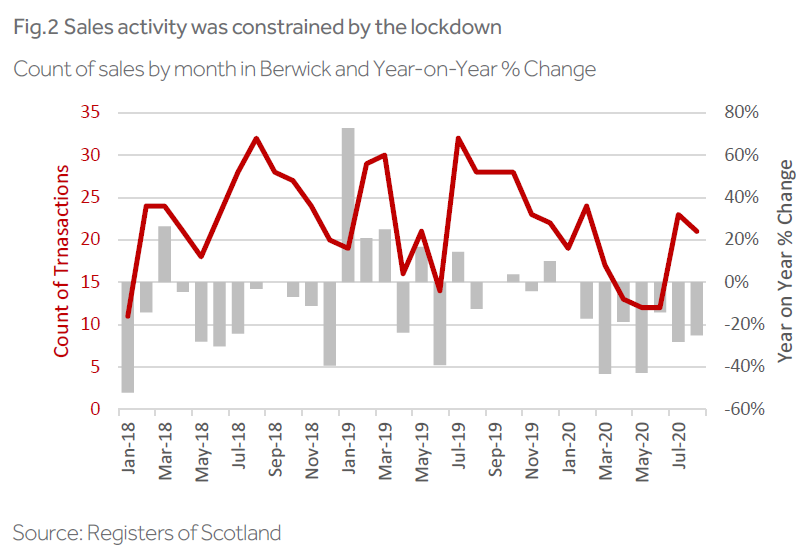 The strength of the market in the latter half of the year has meant that, compared to 2019, there have been lower levels of discounting in the market to achieve sales. This also stands in contrast to more urban markets, where there has been a spike in discounting in some areas, e.g. as sellers attempt to secure sales of less desirable smaller urban apartments. Conversely, the larger detached family orientated stock of the Berwick and Borders region is seeing a rise in demand. While there remains much uncertainty looking ahead, and the persistence of lifestyle changes as a result of Covid-19 are yet to be seen, demand for high quality rural and semi-rural homes that benefit from lifestyle amenities has never been higher.


If you are looking to sell your property in the Scottish Borders, please don't hesitate to contact our Berwick Office.