BTR in Scotland: The makings of a roaring decade!

At the start of a new decade, there is expectation on the Scottish Build to Rent sector to deliver on the promises it made during the 2010s.

In Glasgow, over 2,500 BTR units have entered the planning system in the past 2 years, and now it is time for delivery. The hole in the ground at Pitt Street is physical evidence of MODA’s progress and with major mixed-use masterplans announced in the city centre and over 3,500 BTR units approved, not since the Red Clydeside has there been such a promise of revolutionary change on the banks of the Clyde!

In Edinburgh, 2019 was a significant year. Having lagged Glasgow in recent years, over 1,200 BTR units entered the planning system in 2019 in the Capital. It was also the year that BTR met Edinburgh’s Planning System for the first time in earnest. This conclave resulted in a clarification of how the city’s affordable housing policy would cooperate with the new tenure in town. With operators allowed to manage the affordable rental stock to maintain a tenure blind approach, and with rent levels above LHA, it appears there it has been a product union which looks set to scion a wave of much need rental stock within the city. 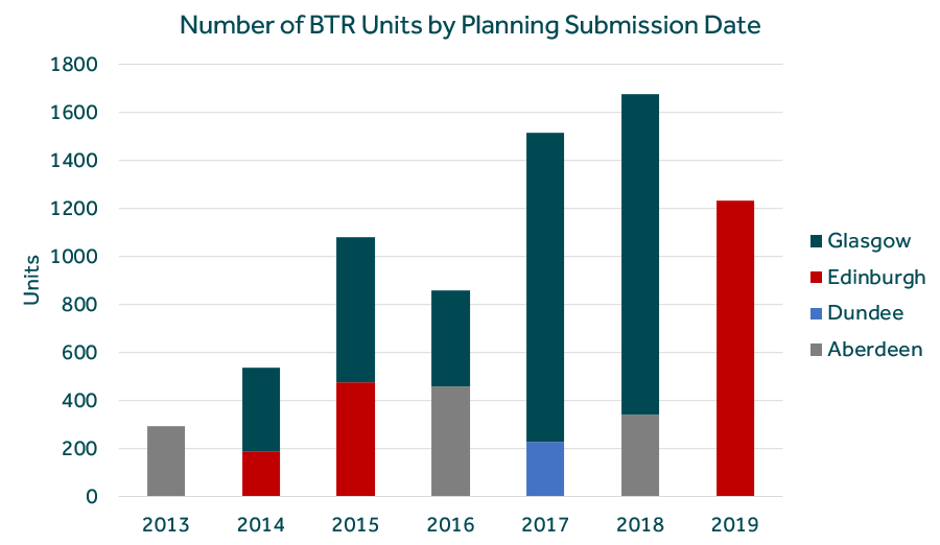 Even Aberdeen, with its troubled recent market conditions, is looking to the future for continued investment and expansion in the BTR sector. Dandara are once again leading the market as they move to deliver over 340 BTR units in the city centre at their Triplekirks site.

We have long been optimistic about the role of BTR in Scotland’s major cities, but with the progress made in the past few years it looks like it might be a roaring decade for BTR in Scotland in the 2020s.