The Ghosts of Markets Past, Present & Future

It is a cliché of rhetoric to exclaim the extraordinary nature of our times, but yet, as we look back on 2018 and foreward to 2019, is this true? And where do we start?

It is a truth universally acknowledged that a housing market in possession of positive growth will be in want of positive economic conditions. It is also academically posited that political instability weakens economic growth.[1] “Therefore, Socrates is mortal”… or rather… therefore political stability is required for a positive housing market. While this glühwein fuelled abuse of an Aristotelian syllogism is not worthy of any considered scrutiny, it does unwrap the issues currently playing Scrooge to the housing market.

As 2018 progressed there can be no doubt that the “slowly, gravely, silently” approaching apparition of Brexit, with its form concealed in a dark shroud, has given buyers and sellers the same “vague uncertain horror” experience by Scrooge. This has seen the strong sales activity that characterised late 2017 and early 2018, especially in the prime and discretionary markets, wane as the year progressed to more typical levels from the past few years. In Edinburgh, with its higher value properties (around 20% of transactions over the £325k LBTT bracket, compared to around 5% in Glasgow), has been more keenly impacted by this latter year trend. While demand remains strong in sought-after areas, overall Edinburgh sales in the year-to-date are down -9% on the same time in 2017. In Glasgow this has been less pronounced at -5%, whilst in Scotland overall sales volumes are down -3% year-on-year. 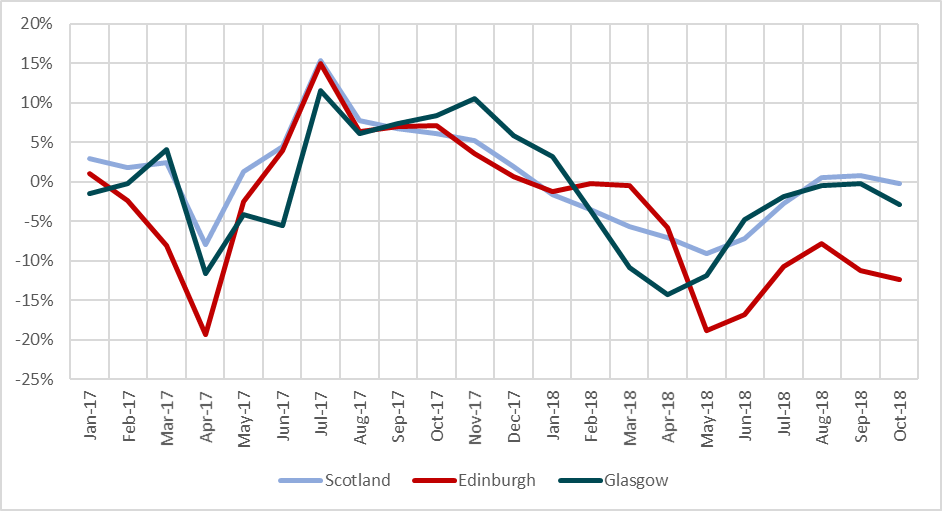 In Bed by 2 Minutes to Midnight

However, while we would could lament these slowing transaction figures with wintery gloom, or could equally despair at the leadership failure of our politicians (whilst reading up on the Dunning-Kruger Effect), perhaps we should pull a leaf out of Steven Pinker’s reasoning and put 2018 in its historical context and count our festive blessings.

Although the economic outlook may be uncertain under Brexit, with only the committed few suggesting the UK’s ability to secure an improved trade position outside of the EU through some sort of Trump-Faustian deal, it should be noted that most forecasts assume some form of deal being reached and expect GDP growth to stay positive in 2019. We will skip past the apocalyptic Catch-22 of an economic slowdown and rising inflation being controlled through the single lever of interest rates, placing it next to the Christmas cards on the mantlepiece, and the stocking filled with the other existential risks that have made the Doomsday Clock tick down to 2 minutes to midnight in 2018 (the lowest point since the first nuclear tests in 1953). We should also bear in mind that even under the Bank of England’s ‘disruptive’ Brexit scenario the UK is expected to avoid recession, which when you consider that so far this decade the UK has been without recession could be seen as a relative positive. Every decade since the Second World War the UK has seen recession; the credit squeeze of the 1950s, the high bank rates and recession of the 1960s, industrial reform and unrest of the 1970s, the early 1980s and 1990s recessions and, of course, the Great Recession of 2008. It might also be worth noting that each decade has typically faced political crisis too; the oil and banking crisis in the 1970s, Black Monday in the 1980s, Black Wednesday in the 1990s. In the even longer view a study this year found 536AD to be the worst year to be alive in history. A volcanic explosion plunged Europe, the Middle East and parts of Asia into to an 18 month long dark fog, causing crop failure, starvation and starting the coldest decade in recorded history. The lack of any sun was exacerbated by a crumbling Roman Empire, invasion of the UK by the Angles, and the first pandemic of the plague, the Plague of Justinian, sweeping from the East. Not to labour the point, or diminish the significance of current events, but at least we still have the sun, albeit only for a few hours a day at the moment.

To continue this optimistic take there were other reasons for positivity in 2018, which is maybe why Scottish happiness levels have been on the rise for three years in a row. Edinburgh has been ranked the most liveable city in the world and continues to place well in international rankings of lifestyle, business environment, tourism and education. With inward migration, population growth, exciting entrepreneurial start-ups and a positive property market Edinburgh has risen up many investor’s Christmas List. Glasgow has seen exciting new investment announcements, including Barclay’s new business hub and planning being granted on two major Build to Rent schemes. These large-scale developments are set to kick start the transformation of the city centre. Dundee has opened the V&A raising its international profile and placing it at number 15 on the National Geographic’s must visit places in the world in 2019. Even Aberdeen, with its beleaguered oil sector battered by the whims of demagogues, has seen its housing market stabilise. With green energy in Scotland breaking new production thresholds there may be grounds for long-term optimism for North East’s future as an energy centre. Many of the fundamentals underpinning the Scottish housing market including demand, demographic pressure and economic outlook are relatively positive, and this have been a contributing to the fact that Scottish cities have outperformed many of their English counterparts in recent years. A fact that has been noted by investors and institutions.

Now there will be those who may suggest I am looking to the future through the heather tinted lens of Scottish exceptionalism, and whilst I may prefer that view this Christmas, they might be right, as there will be hangovers for some in 2019.

First, the recent increase in Additional Dwelling Supplement (ADS) from 3% to 4% will not be welcomed by BTL landlords. While not a group that traditionally elicits sympathy, private landlords are responsible for housing over 360,000 Scottish households, or 15% of the population, rising to 19% in Glasgow and 23% in Edinburgh. While institutional investment in the form of Build to Rent is finally making exciting headway in Scotland, the private landlord is a mainstay of the housing sector. This change, plus previous tax changes, will make the sector a little less appealing for some. Also, whether this change will have the meaningful impact for first time buyers, as it is intended, will need to be seen. Previous changes to LBTT have had an unforeseen behavioural impact on the market, so whether this will generate the 29% year-on-year increase in ADS revenue the government is expecting will also be worth watching. Another maligned subsect of the BTL sector are Airbnb landlords and with rising pressure for reform, recent regulation and legal judgements, 2019 may herald the end of the good times.

Housebuilders too might have pause for concern in 2019. Material prices have been consistently rising in the past couple of years, as have labour costs. These rises are putting pressure on margins and supply chains and under many Brexit scenarios this is not set to improve. This will likely have a cost for consumers, and a wider societal cost if housing supply stalls, given the heavy reliance on the private sector to deliver Scotland’s much needed housing.

Whilst often portrayed as the archetypal villains of the property market - rent seeking slumlords and profiteering housebuilders – these groups often garner as little sympathy as the miserly money lender Scrooge, or the apocryphal Edinburgh Banker Ebenezer Scroggie Dickens is said to have based the character on, however, these stereotypes are largely untrue and the health of both sectors are crucial for Scotland to meet its housing need.

Playing the Cratchit Family and Tiny Tim in this tale, younger households may continue to face affordability and equity challenges, especially in Scotland’s major cities. Without deep equity reserves, first time buyers, second steppers and young families will continue to be challenged by the ongoing undersupply of affordable new homes in Scotland’s cities making market entry or moving up the ladder difficult. Without getting drawn on affordable housing delivery rates versus Government targets, or whether effective 5-year land supplies are being realistic or being delivered, current housing delivery is historically low and not meeting the needs of many. For buyers this will manifest itself in continued pressure on supply and rising prices, especially in desirable areas, leading to the necessity to re-evaluate housing options, tenures, locations or all of the above.

Looking at the forecasts for the next 5 years, all the optimism in the world can’t obfuscate the fact Brexit will likely impact market confidence and potentially lead to an economic slowdown. Under an assumed deal-based Brexit average house prices could see stagnation or small falls in 2019 and 2020 as the market processes uncertainty, before returning to modest growth. In the event of a positive Brexit scenario we would expect house prices to maintain modest growth in the short term. Contrary to current trends we will commit to a course of action and place our central forecast at 1.5% growth in 2019.

While a harsh Brexit deal may result in a market turndown, strong underlying fundamentals in the Scottish market are likely to support continued upward price growth in 2019 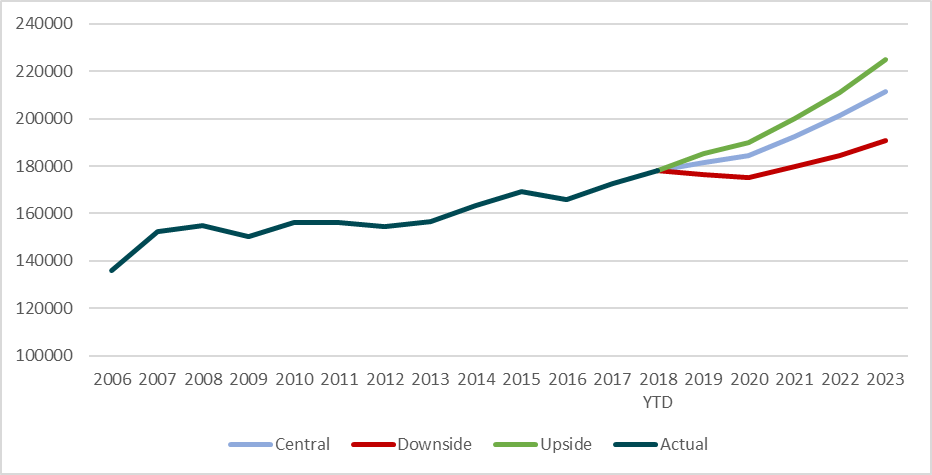 And so to bed…

So, with stockings hung, carols playing, a mince pie, carrot, and dram of whiskey set out, it is time to close this tale and retire to see what Santa brings for us next year. It would be easy to dwell on the madness of global politics, the uncertainty of Brexit or fluctuations in transaction figures, but equally it is important to put these within their proper perspective to see the underlying opportunity and positive fundamentals driving the Scottish market. So just as people may choose to celebrate Christmas by different traditions, so your narrator will bid you Merry Christmas and suggest there are many ways to view housing market with optimism this year, be it through 2,000-year-old philosophical reasoning, academic treatise or Christmas fable.

*Apologies to Aristotle, Austen, Dickens and Pinker for the abuse of their work.