Looking Back and Forecasting Forward to 2020 | Nuggets

There is a Psychological and Cognitive Sciences theory that suggests people look for meaning as a new decade approaches[1]. So, as 2019 draws to a close, the 2020s arrive first footing us with the promise of the season finale to Brexit, a decade after austerity, and a future that guarantees nothing if not change. At this moment there is perhaps an innate psychological need to find meaning in past events, to look forward to the decade to come, and to mourn the passing of the decade which has been our fellow traveller these 10 years past.

Sitting at a keyboard in December 2009 writing about the market was a very different time. We had recently been introduced to term the ‘Age of Austerity’. Labour, a party that once also achieved 43% of the vote, was, although they didn’t know it, in the last 6 months of their own decade of power. We had learned that quantitative easing equalled $5tn, a figure equal to the Chinese economy in 2009.

In the housing market the number of properties sold in Scotland in 2009 was less than half it had been two years earlier. Homeowners, especially those with mortgages of 100% LTV and higher, were reintroduced to negative equity as average house prices in Edinburgh fell £9k and £11k in Glasgow. BTL landlords saw their portfolio values drop and finance options disappear. Housebuilders were faced with an overhang of devalued almost unsellable stock, underpinned by speculative land values and debt, so much debt. Debt that led to a fundamental restructuring of the sector and the near extinction of the SME builder. It is easy to forget that the imperatives of the balance sheet meant that it was not uncommon for buyers to ask for 30%-40% off new build homes' original values. This was December 2009, mulled wine was an anti-depressant, and optimism for the forthcoming decade was low. The only good news, unknown at the time, was that things could only get better. It was a difficult way to meet the 2010s. 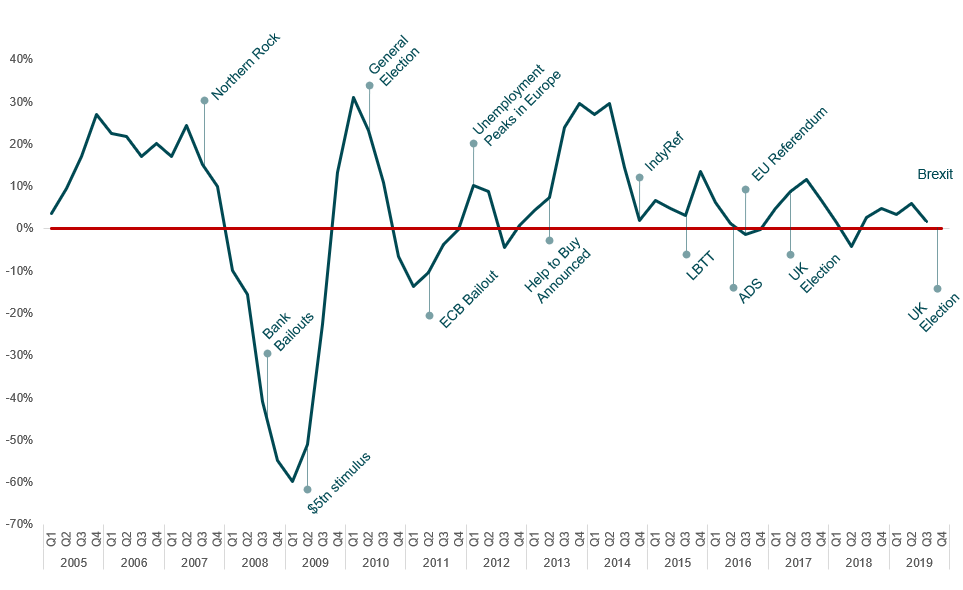 In the words of Nathaniel Hawthorne “Time flies over us, but leaves its shadow behind” so before we attempt to divine the future, there are some notable events from passing decade worth commemorating, and some, such as the top 3 selling books of the decade being the 50 Shades trilogy, which are better interred to history.

The past 10 years has seen the confident rise of the Edinburgh and Glasgow economies as lifestyle led centres of commerce and innovation. Since 2009 the average house price in Glasgow has risen by over 21% and is now c.£160k. Almost all this growth has occurred in the past 5 years with prices rising by almost £30k. Over the past 3 years the compound annual growth rate has been 4.8%. Edinburgh has seen prices rise 32% over 10 years returning a 2.8% CAGR (Compound Annual Growth Rate) during this period and adding almost £65k to the value of the average house. The exception to this upward trend has been Aberdeen where prices have fallen 8% over the past 5 years but are still around £28k higher than 10 years ago, which is the same amount as Glasgow. 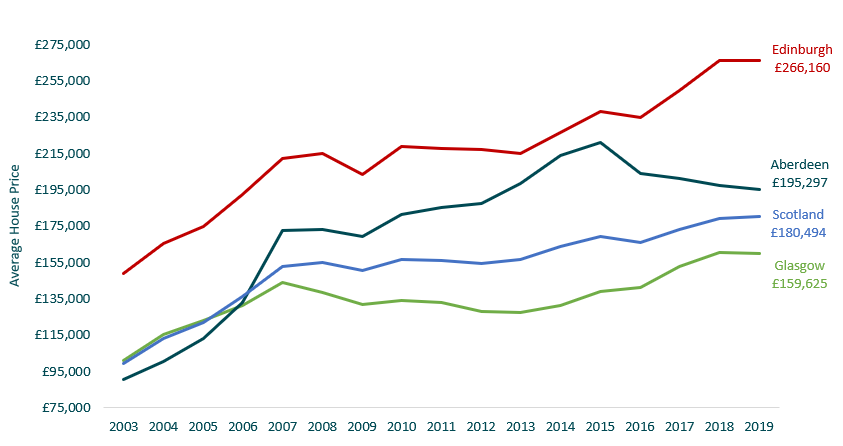 Perhaps the defining issues of our time, and one that is central to housing, is that of wealth inequality. From the abuses of the banking sector at the start of the decade, past the publication of Thomas Piketty’s Capital in 2013, the revelations of the Panama Papers in 2016, and up to current political polarisation and divisive tech billionaire class, the creation and distribution of wealth will be a central issue in the 2020s. The most visible manifestation of inequality has been the rise of tech billionaires. It has been reported that Jeff Bezos would have to spend $28m (£21.2m) a day to not become any wealthier. Over a year this would equate to spending £7.7bn, or to put it into a Scottish property terms, it’s about the same value as all the Scottish residential property sold in the second half of 2019.

The issue of wealth inequality is important as it informs Government policy as the introduction of Help to Buy, LBTT (Land & building transaction tax)  & ADS (Additional Dwelling Supplement), and the Scottish Government’s Affordable Housing target have shown; all been material interventions which have had measurable impacts on the market. Even this week the announcement of the new £150m First Time Buyer Scheme is evidence that these issues will continue to shape the market in the next decade and that government intervention, be it through a new Land Tax or other mechanisms, will be one to watch closely in the next few years.

A Decade of House Building

Often condemned for profiteering, maligned for land-banking, criticised for poor design, castigated by NIMBYs and politicians alike; the truth of the new build sector is that it is an industry uniquely capable of delivering both much needed homes as well as manifesting the aspirations of society’s values in stone. Up until 1978 the public sector delivered the majority of new homes in the country, as high as 97% in the post WW2 era. Since the Thatcher premiership it has been the private sector which delivered 80% to 90% of new homes. Both periods show the political philosophies of their time made real in housing. Over the past decade the private sector has delivered around 75% of new homes.

The industry currently faces rising material costs, skills shortages, and infrastructure and planning burdens, which are all impacting the viability of schemes. Without support we may see a hard limit reached on how many homes can be built, even if as a society we decry a housing shortage and rising prices. 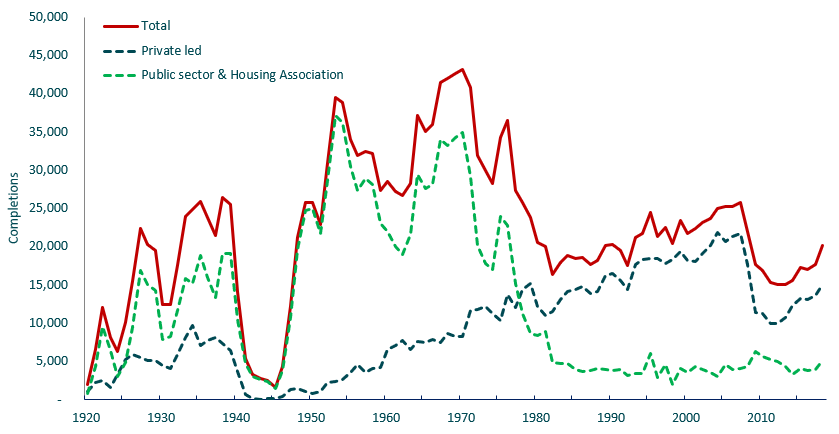 The Rise of the Commuter Belt

As house prices have risen in Edinburgh over the decade, a lack of affordable family housing in the city has led to a significant behaviour change. With the average detached house in Edinburgh costing over £400k, but average household earnings only supporting borrowing up to £250k, a major trend has been the flight of families into the commuter belt. This diaspora has been supported by a wave of new housebuilding that has seen Midlothian deliver the highest number of new homes relative to its population of any council area in Scotland for 6 of the last 7 years, only losing out to East Lothian in 2017/18, which itself has recorded the second highest levels since 2016/17. This has meant that some of the strongest price growth over the past 10 years, outside of the prime city centre market, has been in a ring around the Capital.

A Future of Built to Rent

Whether you see the millennial rental economy as a form of indentured servitude or the effective allocation of capital, the Build to Rent (BTR) sector in Scotland is on the verge of an explosion with the pipeline of units jumping from a few hundred, to over 7,000 in just a couple of years. The reason we need BTR is also quite apparent.

The number of households in the PRS (Private Rented Secton) in Scotland increase by 110,000 over the past 10 years from 240,000 in 2009, to over 350,000 today. Changes to the tax system and increased transaction costs have disincentivised BTL (Buy to Let) investors at the same time as Airbnb has attracted landlords away from the PRS. A report on the impact of short-term rental sector we conducted for Edinburgh City Council estimated that around 10% of PRS stock in Edinburgh has been lost to Airbnb. With rental demand increasing faster than supply, average rents in Edinburgh have risen by over 30% in the past 5 years, and over 20% in Glasgow. BTR has the promise to not only deliver much needed high-quality professional manged rental stock quickly, but through the mid-market and affordable rental sectors to do so at an affordable price. Sigma’s entry into Scotland, and our ongoing work with the Places for People Capital MMR Fund show the diversified role BTR will play in Scotland in the next decade. 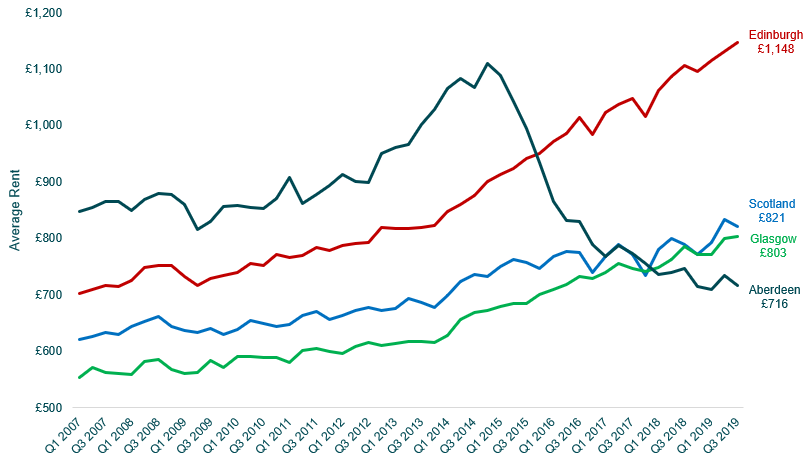 As we get ready to set our out of office replies to a date in the next decade, what are some of themes and trends in the Scottish market which we will be keeping our eyes on in the new decade?

The tram extension to Leith has been a contentious proposal, but that is not uncommon for infrastructure projects design to connect Leith. In the 18th century a proposed bridge between Leith to Edinburgh was proposed to be paid for by a beer tax. This plan was given short shrift by disgruntled Edinburgh drinkers. Having been involved with Forth Ports for over a decade, to see the new masterplan progressing at Western Harbour supported by the tram link will be one of the most exciting projects for Edinburgh.

Perhaps the area that is set for the greatest expansion is West Edinburgh. With a spatial strategy being developed and a series of masterplanned developments from Riccarton, past the Edinburgh Garden District, the Gyle, the International Business Gateway and on to Maybury and Cammo, the city is embracing the philosophy of “Go west, young man”.

Whether you want to call it the Silver Tsunami, the Age Wave or the Grey Horde, the Baby Boomer generation started hitting 65 years old around 2013 and the impact of the ageing population on the economy and the housing market is likely to intensify during the 2020s. With large equity reserves but limited housing options, the grey market remains underserved and we anticipate growth in this sector in the coming decade.

If you’ve managed read this far you might have through you had escaped without any reference to the election, Boris, Brexit, trade deals and Indy Ref 2 but unfortunately not. The 31st January 2020 looks set to be the date that will shape whether we emerge in to a dystopian or utopian decade. This will remain major preoccupation next year and has impacted our forecast.

This time last year we predicted annual house price growth of 1.5% in 2019. Currently, based on the latest data from January to October, the figure is sitting at 1.2%.

While some may see the election as providing certainty and just getting Brexit done, we are not at the end, we are only at the end of the beginning and the real uncertainty remains ahead. For this reason, we are anticipating that market growth will remain subdued with transactions activity remaining relatively flat and in line with the last couple of years. Prices are expected to rise modestly across Scotland with prime markets outperforming broad averages as supply remains constrained. We are therefore holding our forecast at 1.5% for 2020 before expecting stronger growth to return thereafter. 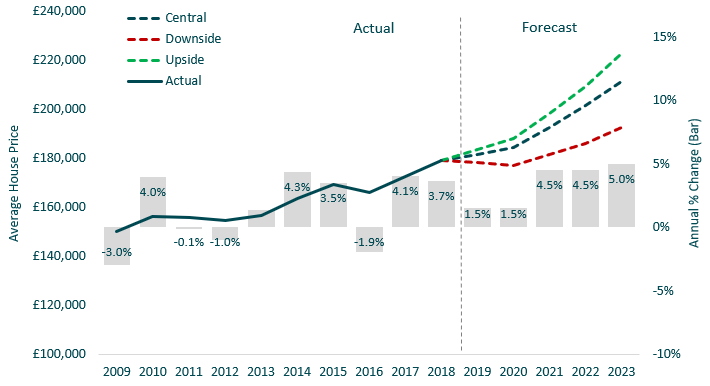 A Eulogy to a Decade Passed

The 2010s had been a hard friend to like at times and its passing leaves one with mixed emotions. Starting on difficult terms, before showing a softer side, it was never boring and like many great characters saved the greatest joke until the end. In paraphrase the words of Mark Twain, I didn't attend the funeral, but this can be considered my nice letter saying I approved of it.

Festive wishes and a Happy New Year from the team at Rettie & Co. and we look forward to seeing you in the roaring 2020s. 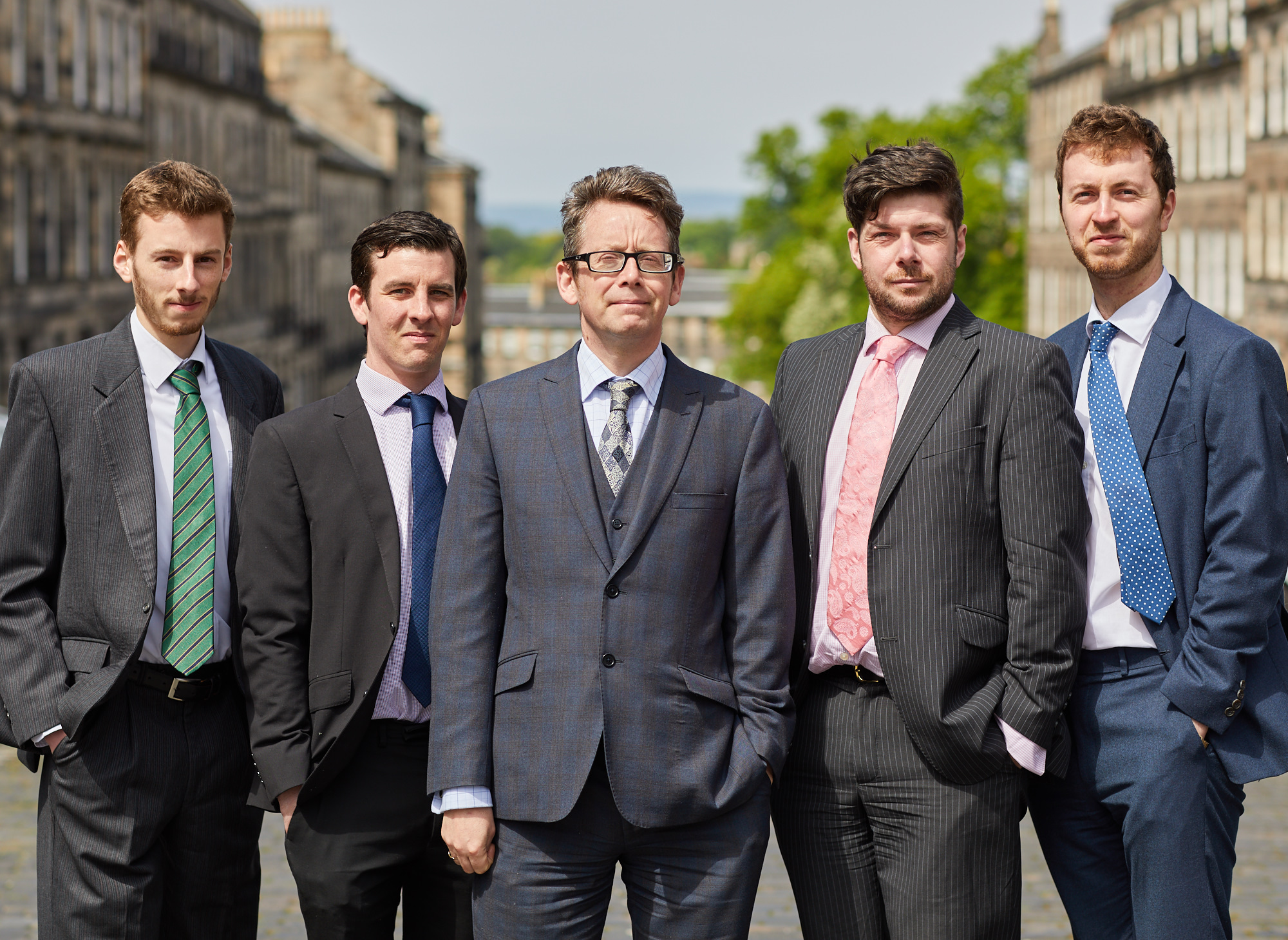