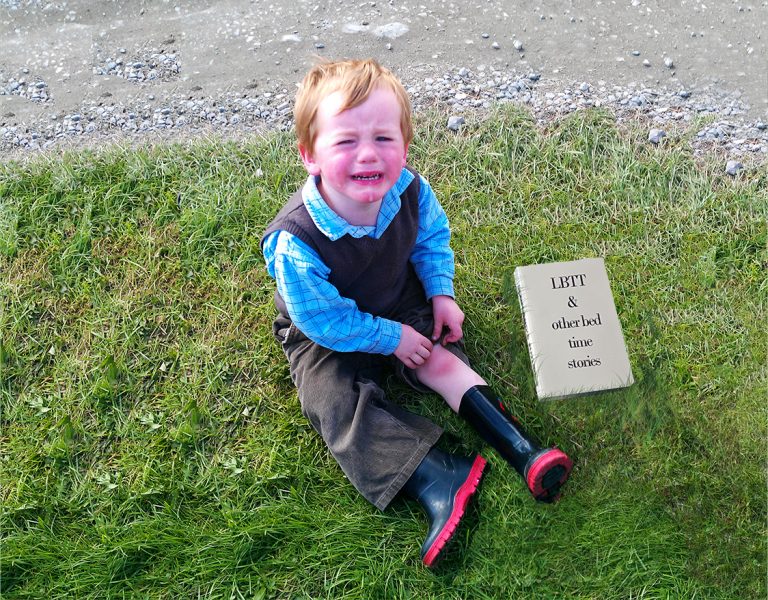 “The Scottish Government needs to be less indulgent with its problem child. It needs to read the parenting manual, do the homework and deliver some ‘tough love’. We will all benefit.”

1. The Arrival of LBTT
2. The Difficult Second Year – ‘The Terrible Twos’
3. The Impacts of the Troublesome Child
4. The Need For Better Parenting
5. The SPF Does Dr Spock 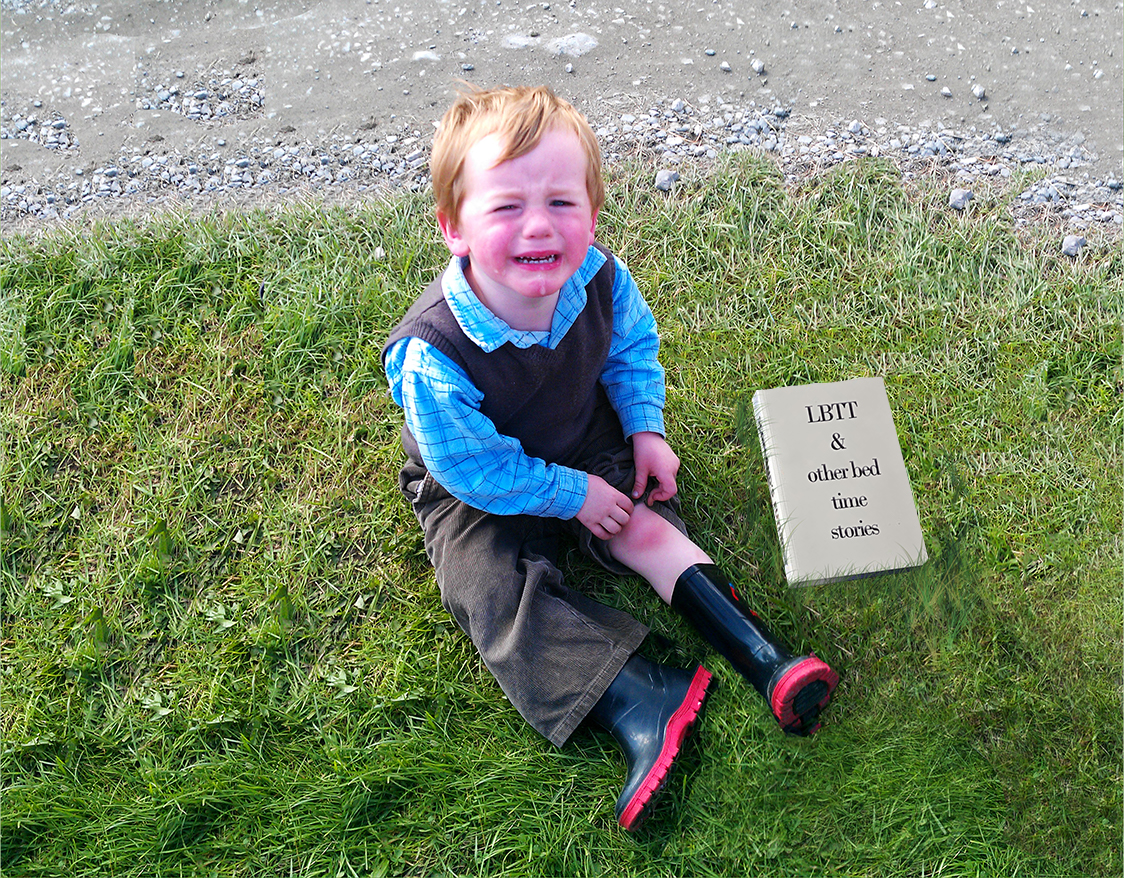 Well, Happy Birthday LBTT, which in April reached the milestone of 2-years-old. It’s still not adequately toilet trained and is leaking away Government revenues, but have we grown to love it as it leaves its baby years, or are we getting sick of the tantrums it is causing?

THE ARRIVAL OF LBTT

After its conception by John Swinney in October 2014, his brand new property transaction tax baby (lovingly called ‘LBTT’, or Land & Buildings Transaction Tax to give it its full name), entered the world in April of the following year. As the first tax introduced by a Scottish Parliament for over 300 years, LBTT received a lot of attention.

The first year of LBTT was not good – it was costing his Scottish Government parents a lot more than it had thought. The tax did not meet forecast revenue and delivered a £33 million shortfall in the residential element of LBTT. This deficit was largely driven by a £35 million drop in the tax predicted for properties sold between £350,000 and £750,000, as a result of forestalling in the market to beat the tax change before it was introduced.

The Scottish Government consulted a very technical parenting manual* and its authors were not kind. Like a Victorian nanny, they particularly criticised the Government for its LBTT revenue forecasts and its modelling strategies. They noted that there were no real estate specialists in the national modelling teams for LBTT and that the optimal data was not used in models. They recommended that the Government replaces its current model.

Further analysis of this dribbling effect, placed the loss through forestalling at between £12 million and £37 million. However, the 2015/16 figures also benefited from another (positive) forestalling effect at the end of this financial year, this time for the introduction of LBTT’s little brother, ADS, or Additional Dwelling Supplement, on second home sales in April 2016. ADS was estimated to give revenues a nudge of £5-7 million for LBTT’s first year. All in all, it was a period of 18 months of tax changes in the market. Having two children quite close together can be double the fun, but also double the pain. 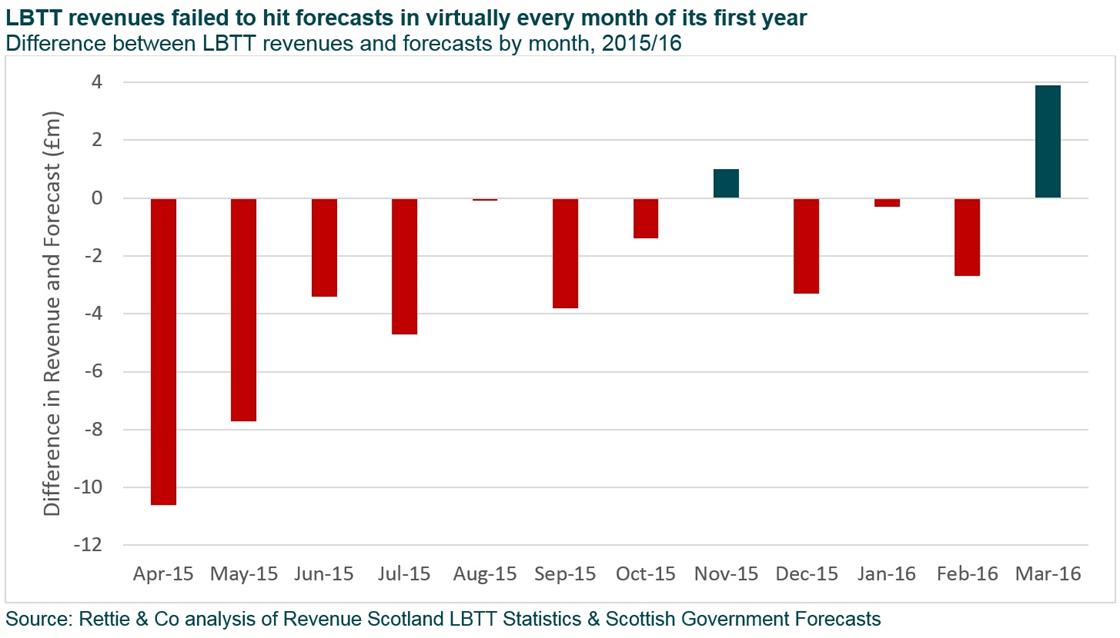 * “Although LBTT is a small revenue source, the housing market plays an important role in the economy. Forecasters may wish to estimate future housing demand, rents, and prices for reasons other than revenue, such as macroprudential stability, real estate market stakeholder engagement, or implementing and monitoring social housing policy. Forecasters may therefore wish to invest significant resources on that basis, and the tax revenue forecast will come out of that process at little marginal cost.”

Given the flood of revenues out of Scottish Government coffers in 2015/16, there is little doubt that, for 2016/17, little boy ADS has been the proverbial ‘boy with his finger in the dike’. The additional revenues it has generated, unanticipated at the time of the birth of LBTT, has prevented the poster baby of the Scottish Government being a bit of an embarrassment. 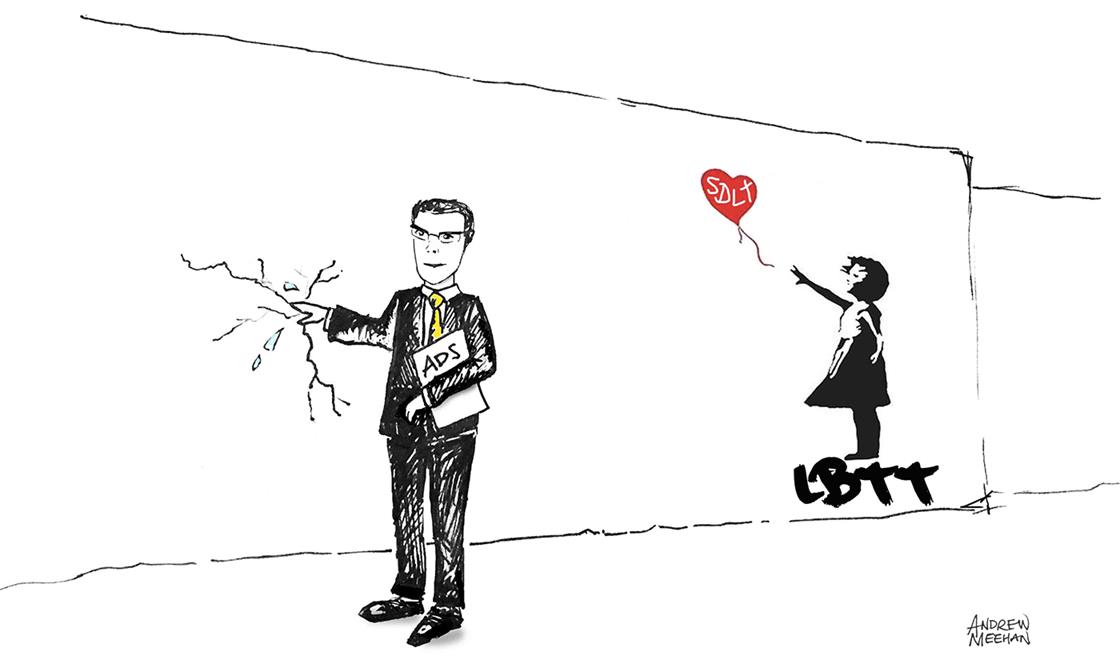 LBTT actually began its second year in a better mood. Unlike the first year of LBTT, there was no reason for sales to forestall in the early part of the year, so LBTT started well up on the previous year, before returning to a very similar pattern of activity, with only a modest increase in overall revenues, which were now £56.9 million down on the forecast (residential and commercial).

ADS stepped in like a good little brother and, over the course of 2016/17, routinely accounted for over 20% of the total residential LBTT tax liabilities. The UK Government decision to introduce ADS and the Scottish Government’s decision to implement it concurrently has given both governments a windfall that was not originally anticipated. Even with this, the Scottish Government is £82 million down (residential and commercial) on original forecasts after the first two years of the operation of LBTT and the Finance Secretary now holding the baby, Derek Mackay, has already reduced estimates for the tax by more than £750 million over the lifetime of the current Parliament. 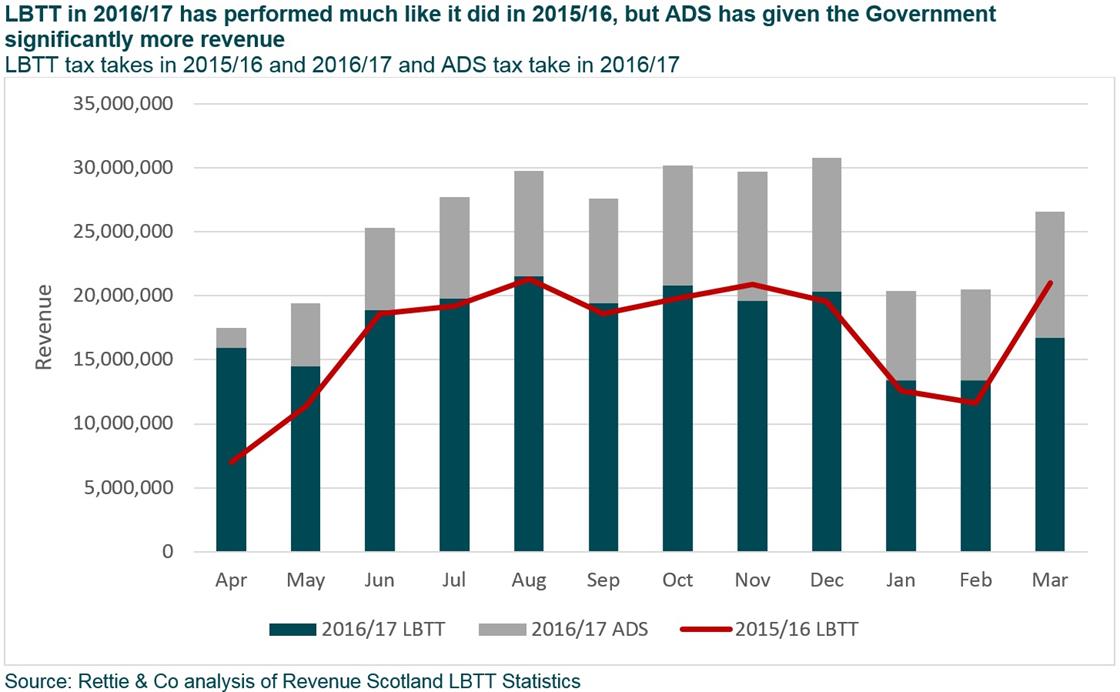 THE IMPACTS OF THE TROUBLESOME CHILD

LBTT has clearly had an impact on the overall housing market, especially at the top end and this is the principal reason for the dramatically lower performance on tax take.

Based on a 12-month rolling total of transactions, in order to smooth out fluctuations, it is clear that the overall housing market has been slowing down over 2016, with the higher bands actually declining.

Compared with how it was operating pre-LBTT in 2014, we estimate that the market has lost around 10% of sales over £425,000 in the first two years of operation of LBTT. This also appears to be creating a chain effect, with the lower to middle parts of the market also slowing given the lack of stock coming on to the market in the higher reaches. 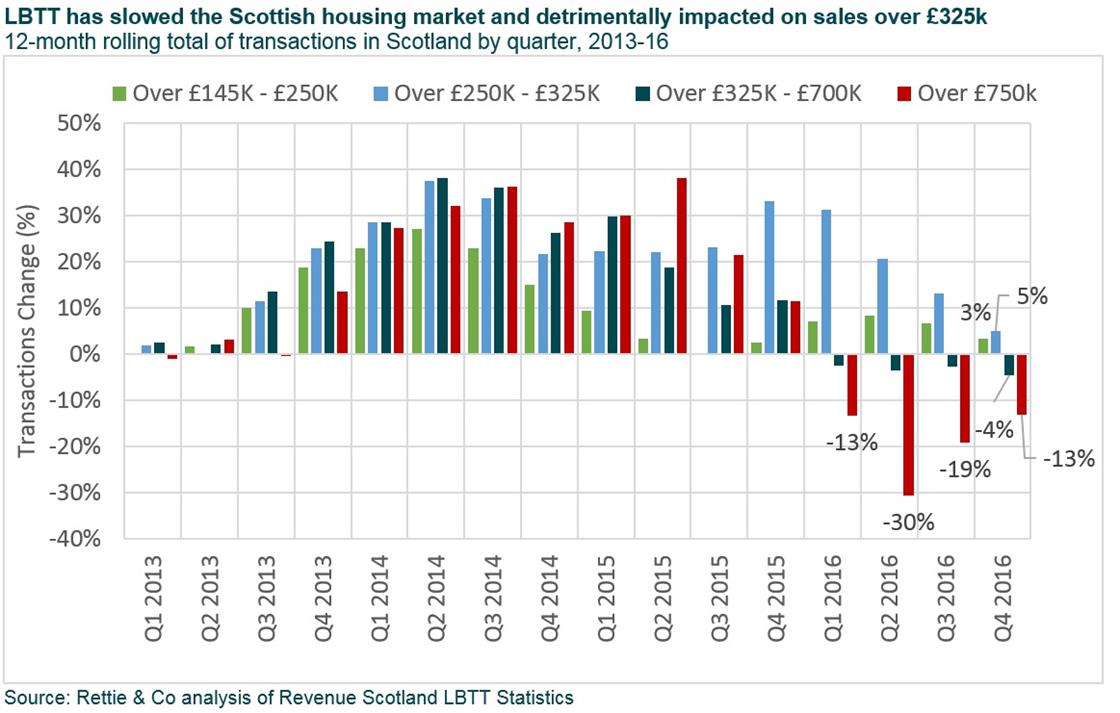 The Scottish Government’s changes to property taxation has meant that more of its revenues are now dependent on a relatively small number of sales.

This pattern reflects the progressive nature of the tax, but also creates a reliance on generating enough sales at the top end, with over 70% of revenue reliant on only 7% of residential transactions. 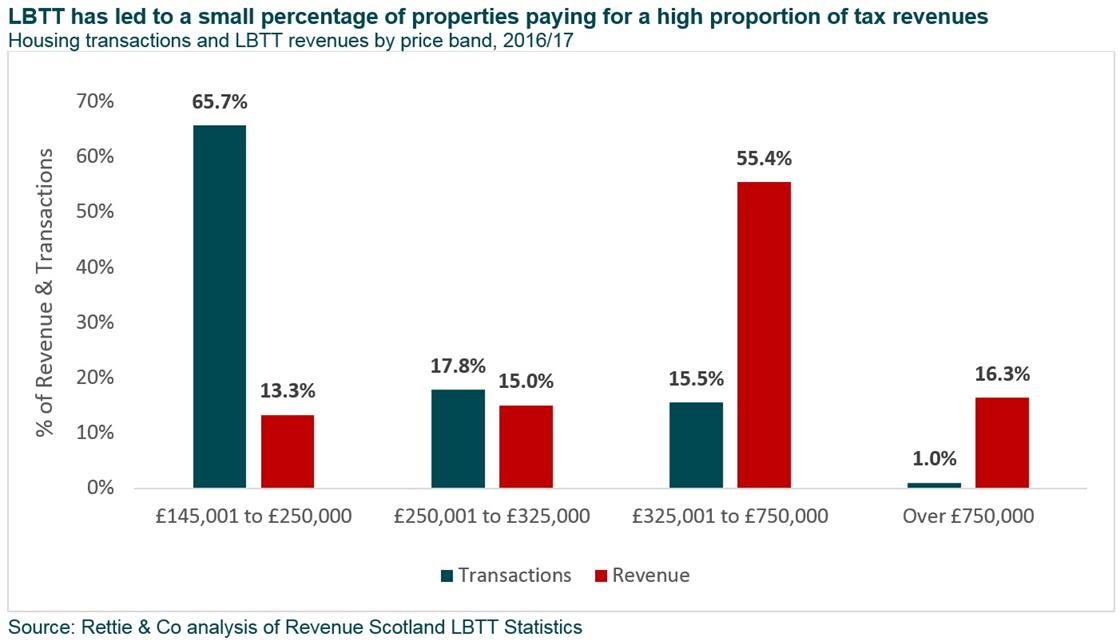 THE NEED FOR BETTER PARENTING

LBTT provides little or no savings for those buying property below £333,000 compared to the old Stamp Duty, but, at the middle to higher rungs of the market, it is, at best, a disincentive and, at worst, prohibitive for many to move to housing that suits their need. Whether this is families moving up the chain freeing up smaller properties for second and third time home movers, or downsizers releasing equity and moving out of their family homes, LBTT at current levels remains a difficulty.

In terms of recouping the cost of LBTT from house price growth it would now take over 2 years for someone buying a £500,000 house to recoup their LBTT bill in house price inflation.

And LBTT does not simply hit the top end. By removing sales from the chain, it also impacts on the market lower down, evidenced by the clear slowing down of the market since LBTT was introduced. Reductions in supply lead to prices being pushed up.

THE SPF DOES DR SPOCK

By raising the band, sales would be stimulated, raising more revenue for the Government. There would be a saving of around £9,000 on properties priced over £500,000 in terms of property tax, bringing property tax in Scotland more in line to what it is down south. Trading needs to be made easier because a more fluid, flexible housing market means that capital is not required to be tied up in houses longer than it needs to and people can move more easily to new jobs and due to changing lifestyle factors. It would therefore be more redistributive because it would see wealthier households actually paying more tax by being more incentivised to buy and sell property.

Given the market seizures that are continuing, it’s becoming increasingly difficult to argue with this medicine. The £750 million reduction on forecast over the lifetime of the Parliament could have paid for over 1,000 hospital bed spaces a year.

The Scottish Government seems to be in a form of denial. Its spokesman recently said, “Data shows that the market above £325,000 is not performing any differently relative to the market under £325,000.” As can be seen from the evidence above, that is clearly not the case. The Scottish Government needs to be less indulgent with its problem child. It needs to read the parenting manual, do the homework and deliver some ‘tough love’. We will all benefit.